The economic activity index is an economic model calculated monthly by the Economic Development Bank of Puerto Rico. It uses four important macroeconomic indicators to create a model that closely estimates the island’s GDP. An increase of a decrease in this index is highly indicative of a change in the island’s economic output.

The first of the index’s four subcomponents, non-farm payroll, reached a total of 909.4 thousand workers in February. Compared to January, this was an increase of 4.6 thousand, or 0.5%. Compared to February 2021, this was an increase of 6.1%. The total used by the Economic Development Bank differs from what is reported by the department of Labor, due to differences in seasonal adjustments.

The second of the index’s subcomponents, energy generation, reached a total of 1,559.7 mmkWh for the month of February. Compared to January, this was a 2.5% decrease. Compared to February 2021, this was a 0.5% decrease. Residential energy consumption in particular went down in February. With energy costs expected to increase due to the conflict in Ukraine, we can expect energy consumption to decrease, as consumers are faced with increasing\ costs across the board.

The third of the index’s subcomponents, gasoline consumption, reached a total of 72.1 million gallons. Compared to January, this was a decrease of 2%. Compared to February 2021, this was an increase of 4.5%. After a severe decline in consumption during the beginning of the pandemic, there was a significant recovery in 2021. Increasing energy costs, however, could lead to this recovery towards pre-pandemic consumption stalling out in 2022.

Overall, February was a slight slowdown for the island’s economy. Employment still increased, but this was offset by a slowdown for construction and decreased energy consumption. We can expect this trend to continue in March, particularly with increasing energy costs near the end of the month due to Russia’s invasion of Ukraine. 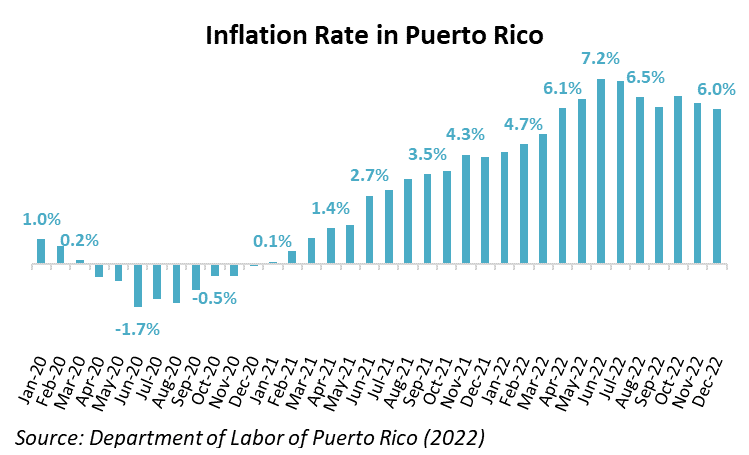